While the most easily quantifiable benefit of EnergyCAP’s utility bill accounting and energy management software might be its ability to help an organization save money, some of its other advantages are best explained anecdotally.

In fall of 2017, Florida State College at Jacksonville (FSCJ) began the process of utilizing EnergyCAP’s Bill CAPture℠ service. When Greg Elliott, FSCJ’s EnergyCAP implementation project manager, was entering the college’s historical energy bill data into EnergyCAP, he noticed a surprising trend: In April of 2017, shortly after FSCJ began using EnergyCAP, the monthly cost for one of the school’s meters dropped from over $140 per month to just $9 per month. 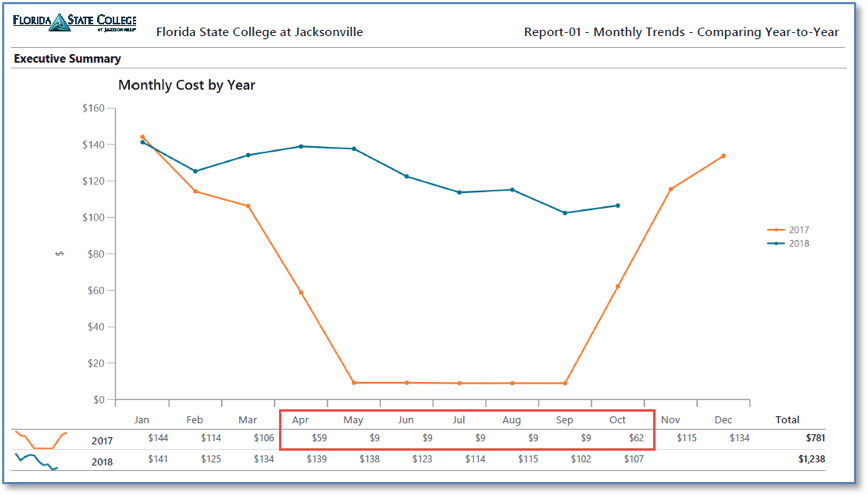 This sizable discrepancy did not have an easily identifiable cause. After verifying the account and meter information and double-checking the files processed by Bill CAPture, Greg decided to investigate further. Upon contacting Val Kovalenko, FSCJ Energy Manager, Greg got an explanation he was not expecting.

Val and the facilities manager researched the meter in question and discovered that earlier in the year, a driver had crashed their vehicle into one of the poles for the streetlights along a stretch of remote roadway on campus, damaging the relay and causing the lights to go out. However, because of the later sunset times and the reduced number of staff and students attending the college during the summer break, the outage had gone unchecked for almost three months until Greg noticed the trend.

Thankfully, there were no accidents or other issues reported on that street during the outage, but the incident raised awareness about safety, usage, and energy efficiency among the energy management team. Val says that, in hindsight, less lighting and lower electricity consumption are good, especially if the effect of it goes unnoticed.  As a follow-up to this event, the energy management team is planning to add all parking and roadway lighting to an automated schedule in their building automation system and adjust the power ON time to only when its needed, ensuring less energy waste and improving efficiency.

We’re grateful for Val’s willingness to share this story with us–it’s a perfect example of the way EnergyCAP helps clients beyond simply crunching the numbers.