Coldest Winter in 15 Years? Weather Data Shows it Depends on Where You Live. 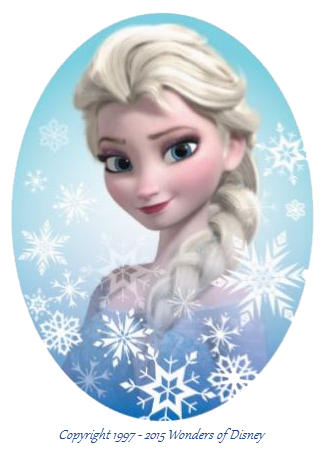 Walking through the streets of State College, Pennsylvania, this past winter, I often found myself quoting Disney’s Queen Elsa under my frozen breath, “The cold never bothered me anyway.” Mind over matter, right? That’s what we told ourselves as we pushed through a brutal winter while our hearts longed for warm sun, lush green grass and the blooming flowers of springtime here in Happy Valley. But as we look at temperature data from cities spread across the lower 48 states, many citizens probably didn’t mind this winter as much we did!

Considering the last 15 years, a few areas could name this winter as the coldest. But outside of the cold northeastern bubble (or shall we say igloo, considering low temperatures), areas out west were experiencing their warmest winter! Cities such as Seattle and Los Angeles enjoyed temperatures above 60⁰ F (even hitting highs up to 85⁰ F) during February 2015 while State College had a few days where the temperature never rose into the double digits.

One of the most reliable public places to access this type of temperature data is Weather Data Depot (www.weatherdatadepot.com):

Heating Degree Days (HDD) measure how much and for how long the actual temperature is measured below a “balance point” temperature (in this case, we have used 60⁰ F rather than the NOAA-standard 65⁰ F because most non-residential buildings have balance points closer to 60 than 65). Using Weather Data Depot to collect the HDD data for State College, you can see how this season (top orange line) compares to the previous 14 years of cumulative HDDs. 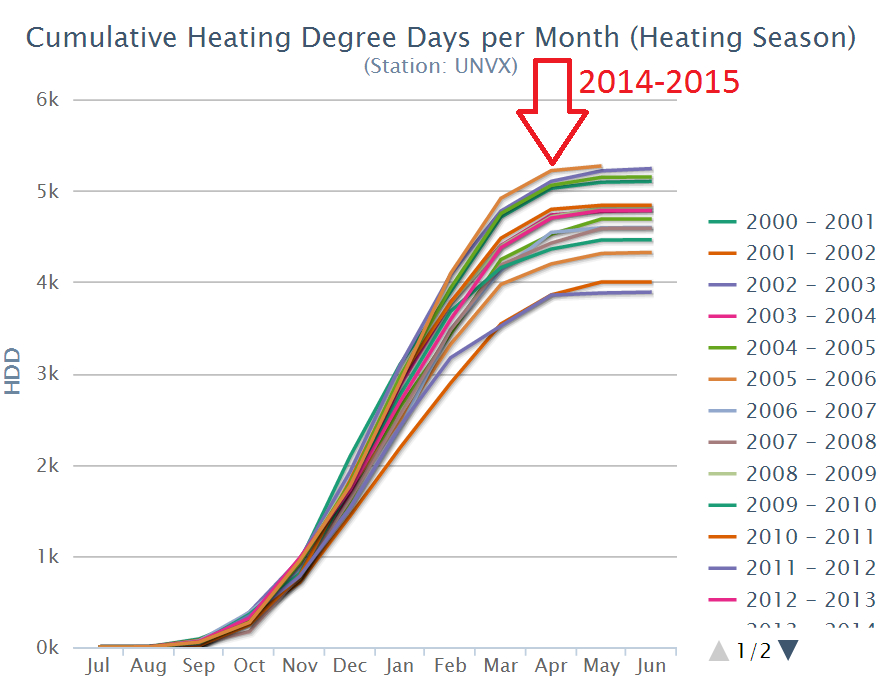 Essentially, more cumulative HDD means a colder season. Here are the numbers behind the graph: 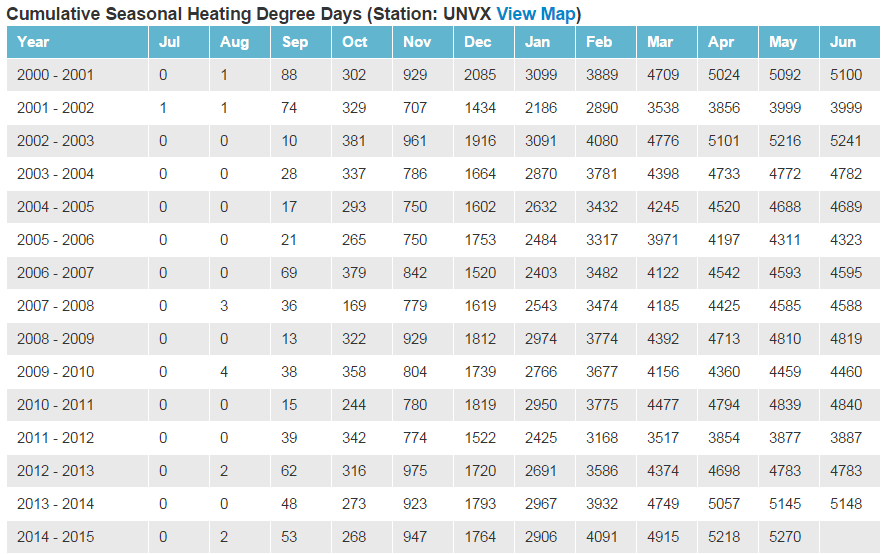 As you can see, HDD is a cumulative number with values rising more steeply during the winter months since that is when temperatures are usually below the balance point temperature. And don’t be confused as to why there are way more Heating Degree Days than days in a year—the monthly number represents the sum of the daily differences in the median temperature from the balance point (in degrees).

By using HDD, we compared State College’s 2014-2015 season (calculated through July-May since June has not been completed but would add very few HDD to current total) with that of major cities across the lower 48 states and THEIR heating seasons since 2000. Categorized by region, here’s how this latest season ranks out of the last 15 winter seasons for each city: 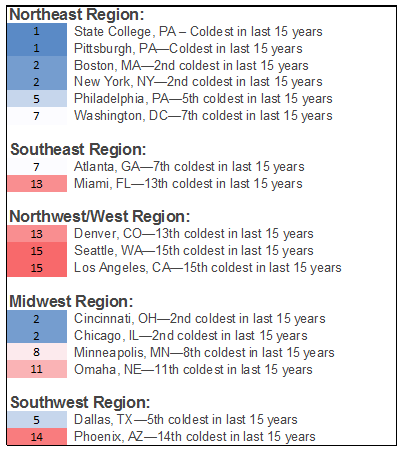 Overall, this winter was not the coldest for most of the country, and at this point in June, it’s safe to pack away the snow boots and parkas here in State College. As for my memory of those bitterly cold days of scraping icy car windshields and shoveling snowy sidewalks, I’m going to “let it go” and embrace the wonderful sun for the next few months before preparing for the next winter season!