Welcome back to my blog series on Effective Energy Management from Home. If you haven’t read the five-blog series or last week’s wrap-up, give them a quick read first.

About this time, you may be thinking, “Wasn’t last week’s wrap-up the last blog in the series? Is this guy ever going to stop?” Okay, great question! I sent the wrap-up blog last week and hosted a full-house live webinar on Thursday featuring effective work-from-home Natural and Renewable Resources Manager Craig Wright of Aurora Public Schools. (Watch the webinar) A few take-aways from his presentation are so important and compelling for work-from-home energy managers everywhere that I couldn’t resist writing a follow-up blog. Equally as compelling, we heard from Lori Herrick Borden, Energy Management Administrator of the City of Virginia Beach, the largest city in Virginia, about how she and her staff are spending their time wisely. I just had to share it with you! Anyone who lives in a resort city named after a beach, but who’s excited to tell her story of what she’s doing as a shut-in…well, she deserves to be heard.

But first, back to Craig and Aurora Public Schools. As Craig recounted during the webinar, thanks to a pilot project grant from Resource Central, a local non-profit, and supplemental school district bond funds, the self-described data and analytics guru was able to install eGauge meters in each school. Each meter seamlessly passes real-time interval data to EnergyCAP, where it’s displayed on dashboards and reports. He even used WordPress to create a public sustainability website for students, staff and the local community.

Back on March 13th, the district shut down for spring break and soon extended the shutdown for an additional two weeks due the Governor’s COVID-19 mandate. At the time, the EMS department programmed the setback calendar for three weeks of shutdown, then back to normal runtimes on April 8 when custodians were scheduled to return to work. The shutdown was subsequently extended of course, but the EMS calendars had not been updated. When Craig looked at EnergyCAP interval data dashboards at noon on April 8, he saw the sudden kW jump due to “occupied” mode kicking back in, and immediately took action to notify the EMS operators to extend the setbacks. The result? Well, maybe a half day of missed savings opportunity on April 8, but a huge amount of potential waste was eliminated in subsequent hours and days. Great catch Craig!

Craig is also quick to recommend that Energy Managers arrange walk-throughs to unplug as many needless devices as possible, particularly if in-classroom school is over for the semester. In general, there are two categories of plug load savings, normal and phantom:

Next, we’ll journey from mile high to sea level and check on Lori.

When we spoke with Lori about how EnergyCAP is helping her be an effective work-from-home energy manager, she said, “Everything works!” The City’s EnergyCAP database is hosted in our commercial hosting environment, so access to EnergyCAP has not been interrupted (see Blog #1). Lori also cited that EnergyCAP’s “Missing Bills” report has been critical for their operation. 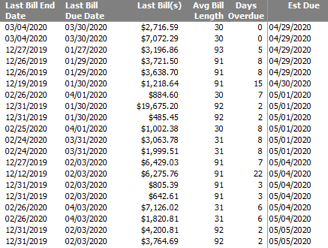 While most of the city’s utility bills are received and paid electronically, some very large bills (e.g., streetlights) are still received in paper format. The Missing Bills report is sent to Lori on a scheduled basis and alerts her to bills that should have been received but have not yet been entered into EnergyCAP. That’s a tipoff that the paper bill is most likely lying in the mailroom or Accounting office waiting to be processed, approved, and paid. Lori and her team then know to visit the utility vendor’s website to download the bill and import or enter it into EnergyCAP. Because of the heads-up provided by EnergyCAP, the City has been able to avoid late fees.

Lori and her staff are in active discussions to move to 100% electronic utility billing and payment, but until then, they’re confident that their bills will be paid on time thanks to EnergyCAP.

If anyone else has great stories to tell about how you’ve effectively managed energy from home, I’d love to hear about it. Post a blog reply or email me.  And who knows, you may even see yet another blog, “Follow-Up, The Sequel.”