Musings on Football and Energy Management

In January of this year, the NCAA settled a lawsuit with Pennsylvania Senator Jake Corman, restoring 112 victories to the record books for the Penn State Nittany Lion football team, and restoring Joe Paterno’s place in history as the winningest college football coach. This was big news here in State College, Pennsylvania, home to the Penn State University Park campus and the Nittany Lions.

How did Paterno achieve his phenomenal record (409-136-3, .749 pct.), and can we learn principles for a winning energy management program from his example?

Paterno did it by creating and sustaining a mature football program. One way he did this was by creating a university-wide expectation of winning. In 1966, his first year as head coach at Penn State, the team had 5 wins and 5 losses. The following year, they were 8-2. The next two seasons after that, they were undefeated. The team did not have a losing or “break even” season for more than 20 years, including seven in the Big Ten Conference. Paterno had convinced his team, and his university, that they could win against any opponent—and win they did!

Some might argue that Paterno was too successful—that he ended up establishing a football culture of privilege that extended well beyond the athletic department. Regardless of opinions in that matter, Paterno impacted the Penn State culture, and the result was a long winning tradition that has continued since his death in 2012.

One element of Paterno’s mature approach to coaching was in his dedication to analysis. At a Paterno “roast” a few years ago, one of his friends illustrated this point by telling a story about the time someone asked Paterno how things had gone on his honeymoon. “I won’t be able to tell you until I’ve reviewed the film,” was the alleged response.

Analysis is impossible without data. How do you know how you’re doing as an energy management professional? There are no post-game film clips, so without data, you’ve got very little objective feedback. Sure, you’re proud of some successful projects and programs, but are you marking the gains and moving the chains? Energy data is at the heart of energy management.

And are you leading the organization forward along the best pathway to future energy and cost efficiency? 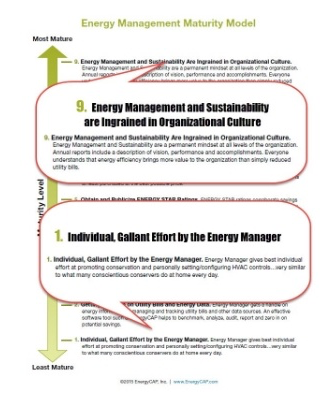 We’ve published the Energy Management Maturity Model as a resource—a tool—that may provide some guidance in assessing the state of your current energy management program. It’s our hope that it will offer food for thought and future action.

The maturity model begins with Individual, Gallant Effort by the Energy Manager. Maybe that’s where you started. Perhaps that’s a great description of where you’re at today.

The model progresses upward in nine maturity steps. Of course, the individual steps and the precise sequence don’t apply equally to every organization, but I think everyone will be able to agree on one point: regardless of your views on the increasingly polarized topics of climate change, fracking, corn-derived ethanol, nuclear power, subsidies for renewables, legislated benchmarking, LNG exports, Keystone pipeline and other incendiary topics, reducing energy waste is commendable and desirable. And as new energy efficiency technologies appear with greater frequency, every BTU not consumed today from non-renewable sources equates to two or more BTUs “banked” for future generations.

In the Maturity Model, the pinnacle is reached when Energy Management and Sustainability are Ingrained in Organizational Culture. If you can move your organization to that level, you’ve built a self-sustaining energy efficiency culture that will be both your legacy and an ongoing source of value to your organization, its stakeholders and audiences.