How Much Will You Save with an
Energy Management Information System?

Expected return-on-investment (ROI) is a critical component of most large capital purchase requests. Energy management information systems (EMIS) are no exception. Implementing a comprehensive EMIS requires a substantial investment of monetary and labor resources, and it may take a year (or longer) before benefits are documented. But rest assured, benefits will be realized.

How much money you will save depends on many factors: how well you are currently managing utility accounts; how much emphasis and resources senior management has applied (and will apply) to energy management; and what tariff and energy supply alternatives are available. That said, it is common for first-year savings and cost recoveries to exceed 1% of the user’s annual utility budget, and dollar savings tell a good story.

Feedback from our clients shows near-term savings in the following areas:

Before your actual monetary savings and payback period can be determined, one fact is clear: you need to get a firm handle on your energy information. Energy information management provides the foundation upon which all further utility bill accounting and energy management initiatives are built. A firm foundation also tells a good story.

But together, dollar savings and a firm foundation tell a great story. Following are some of the stories we have heard from EnergyCAP customers over the past four decades. They represent a range of organization types and illustrate that energy and monetary savings can originate from a variety of sources from across the organization.

The county’s legacy energy management software had been in place for several years without any updates. Functionality was limited, and the user interface was cumbersome, making it difficult to identify billing issues, or generate informative reports. Allocating energy use and cost among county agencies in shared facilities required a time-consuming analysis of complex spreadsheets. The energy management team needed to be able to identify inefficient county facilities, decrease energy consumption, expand use of renewable energy, and verify and quantify the success of their actions. 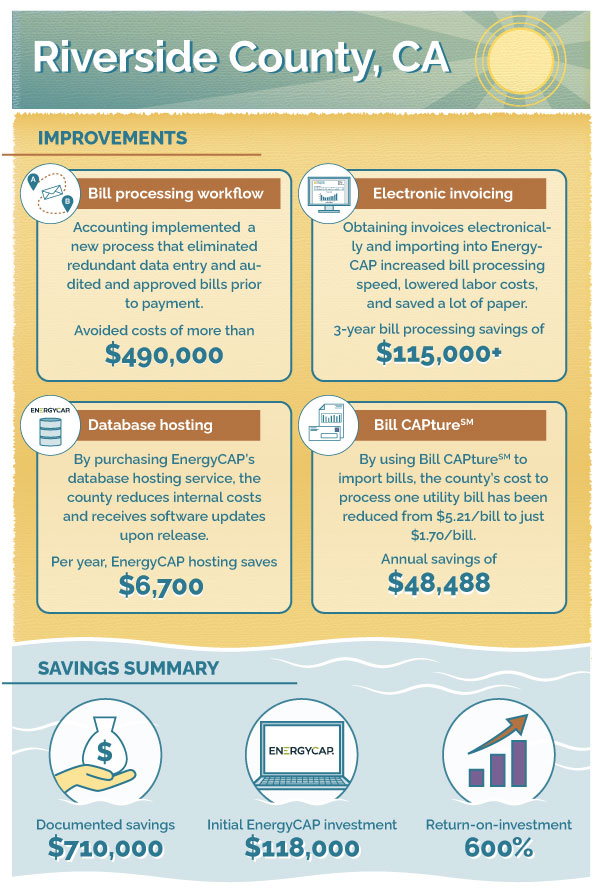 Riverside County’s energy management team implemented the EnergyCAP EMIS in 2011. They agreed on a “one step at a time” approach and focused initial efforts on improving the county’s bill processing workflow. EnergyCAP was set up to be the county’s ‘smart front-end,” receiving utility bills electronically via EnergyCAP, Inc.’s Bill CAPtureSM service, and then auditing them before they are transferred electronically to the Accounting department for payment.

County regulations required that solar project costs must be covered by energy cost savings. Given that, the team had to develop a process to quantify and report revenue generated through the solar projects. They turned again to EnergyCAP to calculate, track, and report on solar kWh generated and the resulting monetary savings.

Riverside County had documented savings of more than $710,000 since implementing EnergyCAP. The sources of those savings include issues captured via EnergyCAP’s utility bill audits ($490,900), efficient bill processing ($164,500), database hosting ($6,700), and utility vendor incentives ($47,960).

The combination of electronic invoicing, the Bill CAPture service, and communication between EnergyCAP and the county’s accounts-payable system reduced the county’s average invoice processing cost from $5.21/bill to just $1.70/bill.

Oklahoma State University’s mission to establish a “culture of conservation” was spawned out of need and a dedication to “do what’s right, even when it’s hard.” As the university grew, so did its energy consumption and, therefore, its annual utility budget. Leadership recognized the advantages—environmental and monetary—of conserving energy and set out to establish an organized energy management program. 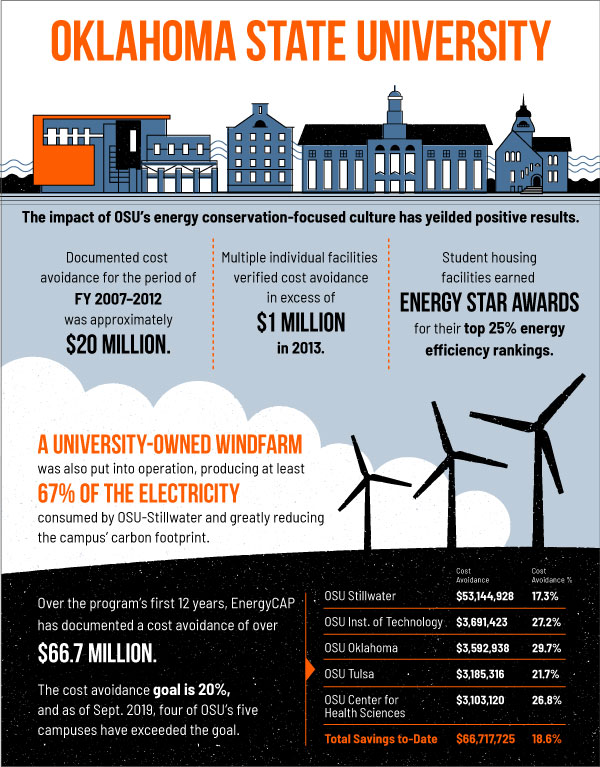 The decision was made to begin with a behavior-based, no capital investment program, and in June 2007, Energy Management Policy 1-0520 was established. Concurrent with initial communication and energy management steps, OSU implemented the EnergyCAP EMIS.

Prior to EnergyCAP’s implementation, approximately 1,000 submeter readings were handwritten in logbooks every month.

EnergyCAP allowed for the immediate upload of meter readings directly to the database. An interface was established between EnergyCAP and the university’s Banner accounting system. With these advancements, vendor and self-generated utility bills—calculated by EnergyCAP—could be audited and approved in EnergyCAP prior to being charged out.

The effectiveness of OSU’s conservation efforts was verified through EnergyCAP’s Cost Avoidance calculations. Lower energy use allowed the university to defer the purchase of a new chiller for the Stillwater, OK campus for five years. The university’s utility budget was not increased over that same five-year period, despite the addition of 566,000 sq ft of building space. Documented cost avoidance for the period of FY 2007—2012 was approximately $20 million.

Energy savings continued after 2012. In 2013, multiple individual facilities verified cost avoidance in excess of $1 million, and the university’s student housing facilities earned ENERGY STAR awards for their top 25% energy efficiency rankings. Since the program’s inception (2007—2019), OSU has documented savings of nearly $359 million and a cost avoidance of 18.6%.

Southeastern Freight Lines, Inc. (SEFL) lacked an in-house system to check utility rates and track energy spending, and there was no system in place to maintain historical energy data for auditing or M&V. The energy management staff were tasked with monitoring all energy invoices, as well as designing retrofit projects, but without a central system for collecting and analyzing the data, accurate data gathering was nearly impossible.

SEFL desperately needed to get a handle on the energy use for their facilities. Since each of the facilities paid their own invoices, tracking overall use and cost was inconsistent. What’s more, many of the facilities did not have trained energy personnel familiar with power and water systems, which meant the invoices that were entered were not necessarily accurate. SEFL needed a way for all energy related invoices to be checked by someone who spoke the language of energy management.

SEFL implemented the EnergyCAP EMIS in 2009 because they determined it was simple, reliable, and quick. EnergyCAP enabled the organization to centralize their utility bill processing, allowing energy professionals to review utility bills before they are paid and capture valuable energy data.

By centralizing the process and training staff to understand the terminologies used for invoicing for the various tracked commodities, SEFL was able to get better reporting on the line item costs that they could control. This has enabled the company to make internal corrections to the way they are using their utilities:

Miami-Dade County (MDC) on Florida’s south-eastern coast is home to more than 2.5 million people. The County’s building portfolio—more than 1,500 facilities—is complex and constantly changing. It includes the County’s top two sources of revenue, the Miami International Airport and PortMiami, as well as other public service facilities:  70 fire stations, 100 parks, 43 libraries, and many others.

The County had been tracking a portion of the utility bills with a legacy in-house Energy Management System (ERS). However, the ERS was not capable of countywide utility management. As a result, accounts not processed via ERS required staff to manually enter data into the different financial systems the County had in place, and all bill auditing was done manually. 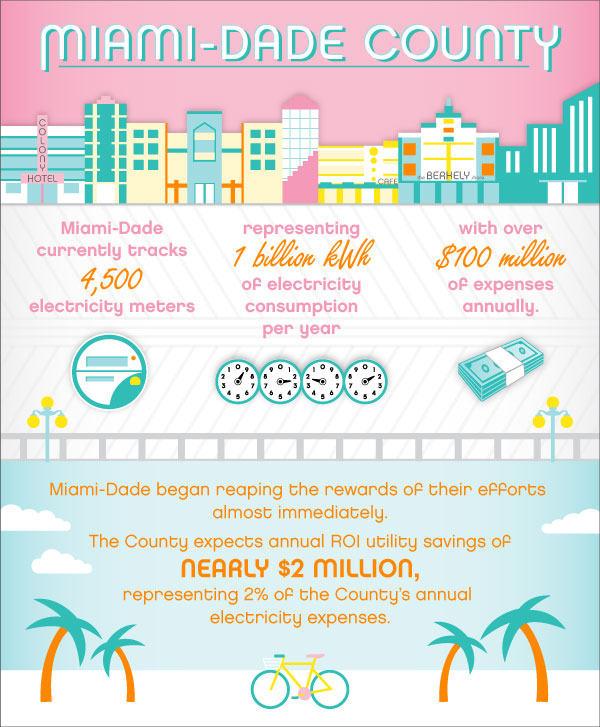 MDC started their EnergyCAP EMIS implementation in January 2012 and has been fully automated with EnergyCAP since October 2012.

At the time of their EMIS implementation, MDC tracked 4,500 electricity meters, representing one billion kilowatt hours (kWh) or electricity consumption per year with over $100 million of annual cost.

MDC leaders estimate an annual ROI utility savings of $2 million, representing two percent of the county’s annual electricity expenses. The savings are attributed to a streamlined utility bill workflow and  being able to see the electricity use and cost data and make corrective changes in a timely fashion.

The University of Kansas

With a multi-campus structure, the University of Kansas (KU) needed to track and audit measurements from more than 1,100 meters and submeters; allocate energy use to a complex structure of divisions and departments; and equitably charge back for energy use. The Facility Management Department also had to provide utility data on demand for custom reports requested by multiple stakeholders. 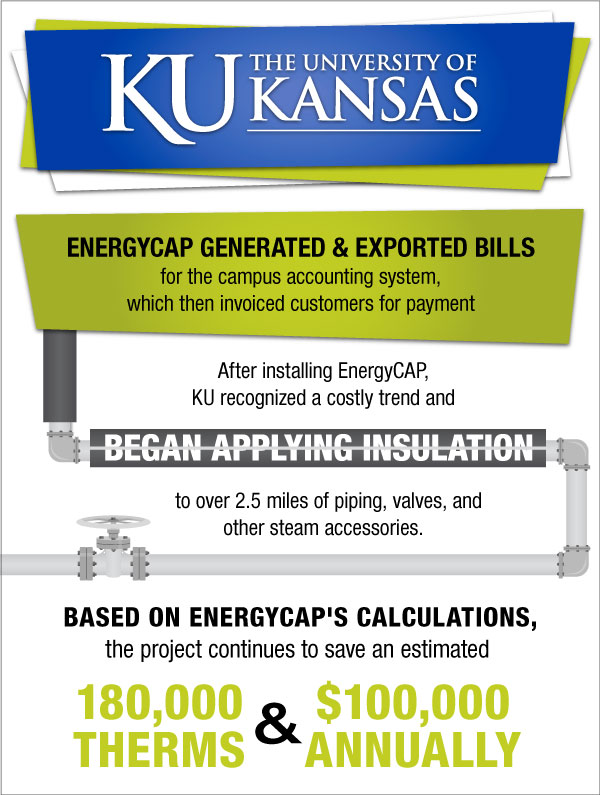 KU made the decision to implement the EnergyCAP EMIS in 2006, and energy accounting for approximately 90% of the university’s property portfolio is managed in EnergyCAP:

For KU, primary value was derived from the software’s ability to calculate and invoice complex chargeback transactions, “a high priority business process.” In addition, the bill auditing features contributed to energy and facility management processes. EnergyCAP PowerViews made it easier for staff to track energy use trends, and the Cost Avoidance feature enabled measurement and verification for a large scale energy project.

With an international workforce dispersed to multiple locations, it was difficult for UniFirst Corporation to track energy rates for multiple vendors. To make matters worse, a decentralized utility bill pay process was causing confusion in managing hundreds of utility accounts, resulting in a high volume of late fees for utility bills that were not being paid on time.

Without a central system for maintaining and reporting use/cost data, there was no way to benchmark the performance of different facilities to spot energy issues and prioritize responses. The company lacked the tools and infrastructure to productively handle and leverage energy information. 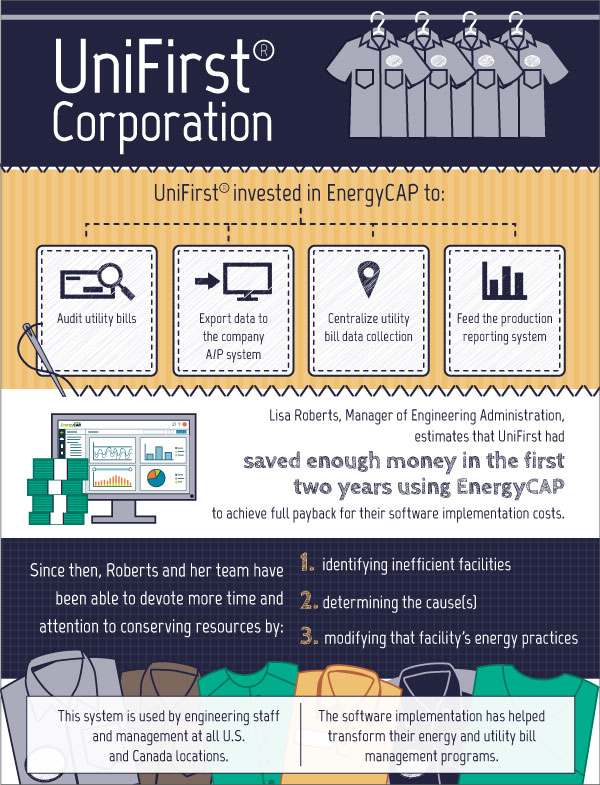 UniFirst invested in the EnergyCAP EMIS to audit utility bills, export required data to the company A/P system, provide energy information for facilities managers, and feed the production reporting system. This system is used by engineering staff and management at all U.S. and Canada locations.

Utility bills are now received at a central location, are entered into EnergyCAP and then reviewed for accuracy. A user-customized dashboard provides the ability to check usage compared to prior bills in order to catch any billing/meter issues up front before bills are paid.

Utility bills are processed far more quickly than before, which has reduced late fees—especially for water bills. From 2013 to 2015, late fee payments had dropped by 44 percent.

Bill batches are now electronically passed to the PeopleSoft A/P system during an overnight process using a voucher code file. The A/P system cuts checks and mails them out to vendors twice weekly.

Thanks to the data feed provided by EnergyCAP, managers have been able to more accurately determine how much electricity, natural gas, and water is being used to process garments using the ‘100 pounds of garments processed’ production metric.

Sewer surcharges were targeted using a custom report that EnergyCAP developed. UniFirst can not only report on the surcharge category, but can provide additional granular data for the three types of surcharges they deal with. At one plant, UniFirst was able to lower sewer fees from $1,200/month to just $246/month by addressing the issues the produced the surcharges.

Download "How Much Will You Save with an Energy Management Information System?" Field Guide